Scenario:
Five KB's for bulletin MS10-087 could not be found in the SCCM software updates repository however they could be seen in the WSUS console on the SCCM ASUP. The updates found in the WSUS console did not clearly indicate that they were superseded and this cause confusion with operational teams. Initial investigation pointed to the updates for MS10-087 were not being sync'ed into the SCCM repository for an unknown reason.

Solution:
Through checking the Microsoft Update Catalog website it was confirmed that MS10-087 had been superseded by a number of later updates that were being actively deployed. The reason for the five MS10-087 updates missing from the SCCM repository was that some time ago the repository was recreated due to database corruption. At the time of the first sync with Microsoft windows update MS10-087 was already superseded so was excluded from the sync process.

Expired updates will not be synced into the SCCM repository if the CI doesn't already exist, if the CI does exist it will update the database record to mark it as expired. The point of difference is expired updates will automatically be deleted from the SCCM repository 7 days after their state has changed to expired in the database. It is important to remove any expired updates from update lists, package and deployments to avoid orphaned database entries otherwise software updates CI replication to child sites could break.

How to check the status of an update on-line: 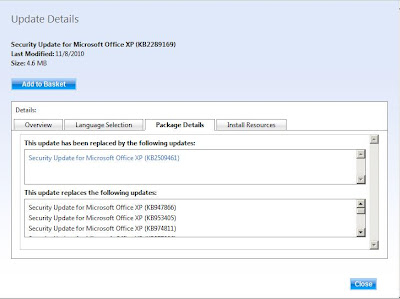 3. Click Search and you will got the updates return.

5. Click on the Package Details, you can then view the supersedence information for this update.
Posted by Unknown at 00:41